New Jerseys On The Way?

We've been seeing subtle hints for the last few weeks now, but did we just get our first real glimpse at what might be the Sacramento Kings new jerseys this season? Join us as we examine the greatest fashion mystery of our time.

Share All sharing options for: New Jerseys On The Way?

We'd heard rumblings and had been seeing subtle hints for a few weeks now. With new ownership comes many changes. New coaches, new players, a new arena... and soon we might be seeing our favorite team sporting a brand new old look!

Forget True Detective Season 2. We've got our own case to crack. Take a journey with me as we solve one of the most important fashion mysteries of our time. Examine the evidence. Come to your own conclusion. On this episode of: The Fippin Files!

The pieces of the puzzle really started falling into place just a few days ago. Think back to draft night. The sun was shining bright. You could hear the sounds of children playing. Can you picture it? Everything happened so fast. You might have missed the clues amidst the flurry of trade rumors. Trust me, I know. All those damn Euros getting picked up in the late first made it hard to concentrate. I took a drag from my cigaret as I anxiously swirled a glass of whiskey in the other hand. It seemed like just another NBA draft... and then HE walked into my life. 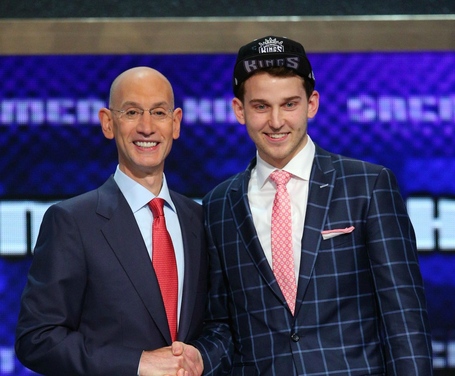 The first clue was right there in front of us. Did you see it? Notice anything off about this photo? Still not seeing it? How bout now? 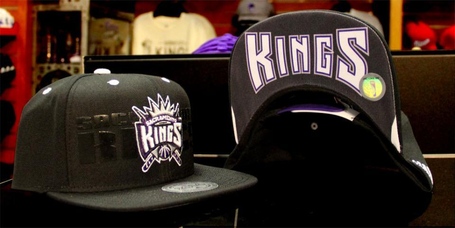 That's right, it's the 2014 draft hat see? But something about it just wasn't right. And yet, at the same time, it seemed perfectly normal. Perfectly normal like a fox!

Uncertain what I was seeing, I googled an image of the 2013 draft hat. And then it became obvious. 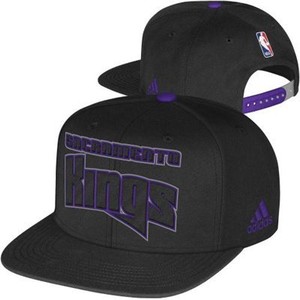 Whoa, the logo was totally different! Since 2002 the Kings had been rocking the logo you see above. Uppercase "K" with the "ings" in lowercase. It's been on their website. It was on all their merchandise. It's the font they used on the logo at center court... until last season. Hell, they still have it on the backdrop they use for press conferences. 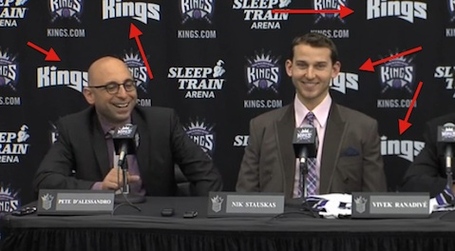 Turns out, the 2014 draft hat looked super familiar because I had seen it a MILLION times. Right there under the bill is the same logo the Kings had on their jerseys from 1995-2001. It was the very first logo they sported after the switch from Red/White/Blue to Purple/Black. Mitch wore it. Spud wore it. Bobby Hurley wore it. The Wizard wore it. THE GREATEST SHOW ON COURT even wore it for a bit! 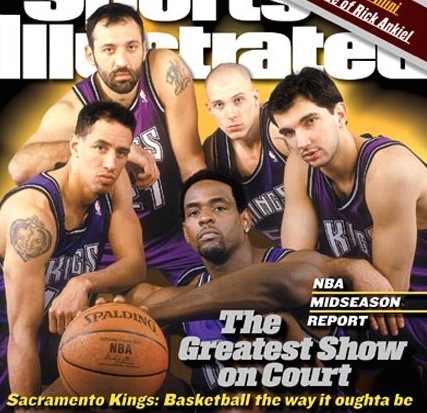 Amidst everything that's gone on this offseason, you might have missed that the Kings had already begun to slowly transition their website over to the all uppercase logo as well. Well, I didn't... because i'm a goddamn pro! 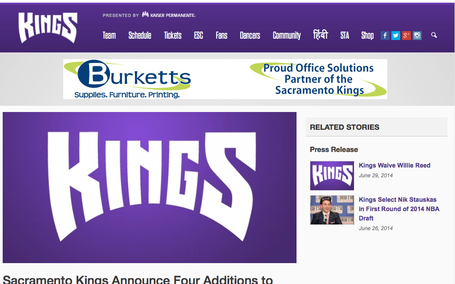 But up to this point I was honestly just guessing. This was obviously all conjecture. I needed to move on with my life. We had no case.

Just a few days later Kings Co-Owner and StR favorite, Andy Miller, would drop a fashion bomb on us all. He took to twitter to confirm that a logo transition was indeed underway. But in this tweet we're presented with a purple version of a font we're already using! WHAT DOES IT ALL MEAN?!

Whatever it meant, he wanted to let us know that transitions like these can take some time to pull off. A "couple years" to be exact.

It looked like the jerseys in our closets weren't going out of style anytime soon. 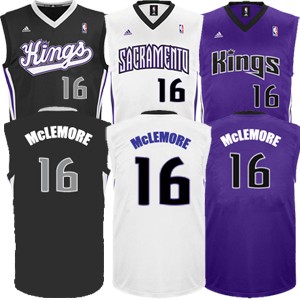 I was resigned to the fact that I was probably reading too much into things. I was too close to the case. It had become personal. Surely it'd be a while before the Kings were rocking a new look.

Then George Takata happened. It was the break I needed! George is the biggest Kings fan in Fresno and a news anchor for KSEE 24 (KSEE 24, LOCAL NEWS THAT MATTERS!), who also apparently has a pal in the sports apparel business. Takata's keen newsman reflexes kicked in when he spotted something interesting in a brand new catalog from his buddy's store.

You'll notice the home and away jerseys pictured are basically the same as the ones we have now. BUT, they now include the same '95 logo from this year's draft hat. Also, you'll notice even bigger changes in the white home jerseys. They no longer have the word Sacramento stitched across the chest (which never made sense to me anyway). A couple of years ago, when we were in the midst of maximum Maloofery, that would have meant the team was surely moving. In the year of our lord 2014, with Vivek in charge, I honestly think it just looks better.

What do you guys think? Real or fake? Clearly it's same logo the team is using as the header on Kings.com and the one they wanted Nik Stauskas wearing on draft night. Andy Miller told us some changes were in store. Maybe this is just the start of a major makeover. But, all you purple purists out there have nothing to fear.

So, are we getting new jerseys this season? While we'll have to wait for an official confirmation, all the evidence sure seems to line up nicely. I dunno about you guys, but i'm going to start setting some cash aside.