Let's stop pretending this decision was about "creating a change" or that Darren Collison is more "pass-first". The Kings didn't want to pay starter money for Isaiah Thomas so they didn't.

Share All sharing options for: The Kings choosing Collison over Thomas comes down to money more than anything else

Pete D'Alessandro's recent decision to sign Darren Collison to a 3 year, $16 million contract caused a bit of a firestorm here in Sacramento as it seemed to signal that the Kings would not be pursuing Isaiah Thomas any further.  While Collison is not a bad player by any means, Thomas is better statistically, younger, and a fan favorite in Sacramento.

In yesterday's Sacramento Bee, Ailene Voisin unsurprisingly wrote a column in which she explained that the reason the Kings have chosen Collison over Thomas is that he's more pass-oriented and cheaper than Thomas.  Ailene has it half right, but first let's tackle the part of her premise that I disagree with.

Mostly, though, the Kings needed a change, a new look, another approach. Eight losing seasons - and back-to-back years of 28 wins - tells a pretty ugly story. The chronic overdribbling, slow tempo, and lack of spacing and movement became a disease that spread with every bounce of the ball. It was as hard on the eyeballs as it was on the wooden floor.

Thomas was hardly the only culprit, but he was the primary ballhandler, the player relied upon to establish pace and facilitate an offense, while harassing opposing ballhandlers, and in that sense, he was simply miscast. He is - and we have said this before - a Vinnie Johnson or Jamal Crawford, a clever, at times explosive scorer. The cover page of his portfolio should read, "Have Ball, Will Score." 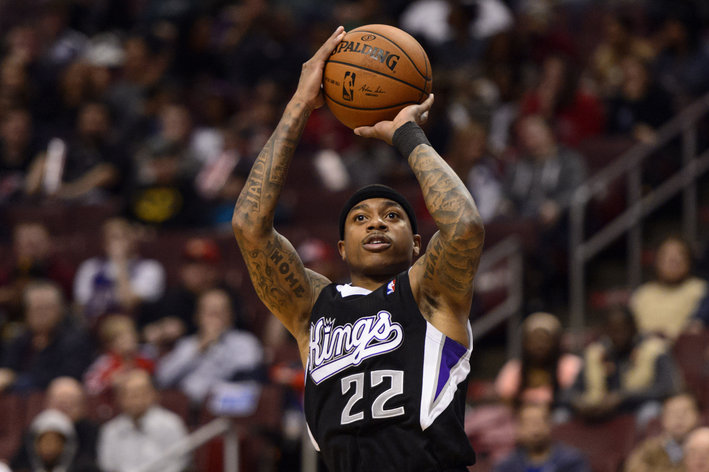 The Pizza Guy has been fantastic in Sacramento but it's unclear whether the team will bring him back if his price is too high. That would be a shame.

It's true, Isaiah Thomas is a score-first guard, and he has admitted as much in recent interviews.  There's a very simple reason for this, that being that Thomas is an exceptionally good scorer.  The only Point Guards who averaged more points per game than he did last season were Damian Lillard, Kyrie Irving, and Stephen Curry.  If you include only his statistics as a starter, he averaged more points than Lillard and Irving as well.  But there seems to be a false dichotomy that because Thomas is a good (some would say great) scorer, that he cannot pass or make his teammates better.

Darren Collison has been portrayed by Voisin and some others as a more "pass-oriented" lead guard than Thomas, a more natural floor leader.  I have yet to find a single statistic to confirm this.  In my opinion, the only reason Collison is depicted thusly is because he's a similar passer but not nearly as good a scorer (this isn't to say Collison can't score, because he can, and is relatively efficient as well).

If we look at Assists alone, Thomas' 6.8 in 54 games as a starter last season easily surpasses Collison's 5.3 assists in 31 games a starter for the Clippers, and that was with a far superior supporting cast to work with.  Thomas also had the far superior assist rate, at 32.2% to Collison's 21.9%.  Collison's assist rate has decreased almost every year he's been in the league after starting out with a relatively impressive 32.9% his rookie year.

Then there's "shots per assist chance", a statistic compiled by NBA.com and tweeted by Seth Partnow, a writer for ESPN's ClipperBlog:

The Kings were willing to offer $5 million to $6 million per year for four seasons - with the idea of Thomas as a super sub. But they were unwilling to match the $8 million to $9 million he reportedly was seeking and confident he would attract, given the four-year, $32 million contract Avery Bradley agreed to with the Boston Celtics and the three-year, $19.5 million deal Jodie Meeks reached with the Detroit Pistons.

and this quote from Pete D'Alessandro:

"We're still having conversations with Isaiah's agent and will continue to do so," said Kings general manager Pete D'Alessandro. "We'll see where those conversations take us. With us, we're looking at the big picture. So we're putting our plan together, assessing what the best chemistry is and working toward long-term sustainability. It's a puzzle. Every team is trying to put together the right pieces."

That bold emphasis is mine.  Isaiah Thomas is rightfully seeking a similar contract to those his peers have gotten for similar (and sometimes lesser) production.  Avery Bradley, Jeff Teague and Brandon Jennings have all signed multi-year deals worth $8 million annually over the past two seasons.  Given Thomas' ability and production, that seems like a reasonable starting point for him to bring to negotiations.  But the Kings don't view Thomas as a long term starter, and as such don't want to give him long term starter money.  Whether you disagree with that viewpoint (as I and many other Kings fans do), it is what the Kings believe and it is why it is highly unlikely that the Kings will be matching any offer for Thomas aside from in a Sign and Trade.

Here is Sacramento's current cap situation for this season and next:

* DeMarcus Cousins' max salary was estimated using last season's max salary calculation of about 23.3% of the salary cap and as such may be off by a little bit.
**Italicized salary is a qualifying offer amount and as such is not guaranteed.

All salary information was compiled thanks to ShamSports.com.

After Collison's signing, the Kings only have about $780,000 left before hitting the luxury tax, and because they used the non-taxpayer Mid-Level Exception to sign Collison, they have a hard cap of $4 million over the tax or $81 million, a cap which they cannot exceed at any time.  If Kings were to use the stretch provision on Jason Terry (the stretch provision allows you to spread a waived player's cap hit over twice the amount of remaining years plus one), the maximum amount of annual money they could offer Isaiah is about $8.6 million, and that would still mean the Kings are over the tax with a roster not much different from last years.  That is why a match for Thomas is likely out of the question and even a sign and trade would be difficult given that the Kings don't have much leverage in the matter.  Should Thomas sign an offer sheet with the Lakers for example, a sign and trade would be rather pointless given that the Lakers have nobody really to trade (that's not a joke, the only players under contract are Kobe Bryant, Kendall Marshall and Robert Sacre).

The Kings likely don't view Collison as a long term starter either, and they did not pay him as such.  Their eyes are likely on the summer of 2015, when the Kings are set to have almost $25 million in cap space (and still plenty even with a possible Rudy Gay extension) and big names like Rajon Rondo, Kemba Walker, Ricky Rubio, Reggie Jackson, Goran Dragic, and Tony Parker all possibly available.

Pete D'Alessandro has not been afraid to make big moves in his short tenure here, but in this case, I feel as if he's making a mistake and undervaluing what he already has in the hopes of finding something better.  In the Bee article, both he and Voisin talk about how the last two years of 28 wins are "unacceptable" and that change is needed.  That is certainly true, but losing one of your better players for potentially nothing doesn't seem to be a step in the right direction.  If you were to make a list of reasons in order of importance as to why the Kings won only 28 games in both of the last two years, Isaiah Thomas would be about as far down the list as you could go.  More to blame would be a lack of team defense, a complete change of ownership and management (in a good way but still a transition), huge roster turnover, and little to no production from the Shooting Guards, Power Forwards or Bench.

This is all a bit unfair to Darren Collison of course, who has done nothing wrong and yet has already drawn the ire of some fans because of who he is not.  He's a fine player, and were he coming to Sacramento to play with Thomas, would widely be seen as an excellent signing, but alas, he is meant to replace him and his tenure here will forever be viewed under that light.

The Kings are not done with their offseason yet and there are still plenty of moves to be made, but in the here and now, and likely for future seasons should Sacramento's ploy to get an elite Point Guard via trade or Free Agency not pan out, the Kings have gotten worse when they should be striving to get better.  It's still not too late for them to bring back Thomas, but it seems clear at this point that the Kings are moving on and for Thomas' sake, so should he.