Downtown Plaza continues to shrink. Demolition is expected for another six to eight weeks, according to the Kings.

We're now on day 55 of the arena demolition of Downtown Plaza (738 days away from opening day) and the shell of the building is gutted for the most part.

There is no set completion date yet for the interior demolition but it will remain in progress for the next six to eight weeks, according to a Kings spokesperson. The construction team has been working on the continuation of dewatering and pile test programs as well as the drilling/installation of test dewatering wells, although the wells have not been completely installed yet.

Below are videos that give a good idea of what the two-block plot of land currently looks like.

The Kings released this bird's-eye, drone view of the demolition site this week.

This is a two-block, street-level view of the demolition site, beginning at 7th and L Streets, looping around at 5th Street, back up J Street and around again at 7th and J. Notice that you can now see through Downtown Plaza in between J and L streets at 6th Street (this is featured at the 1:44 mark of the video.)

There also is a time-lapse of the Downtown Plaza spire coming down.

Here is an additional photo of the work being done on the J Street side near the Downtown Plaza underpass on 5th Street. 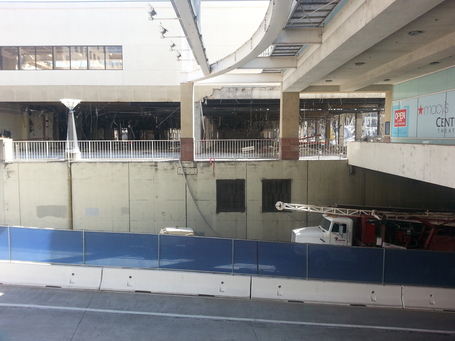 As always, you can send us pictures to be featured on the site at asksactownroyalty@gmail.com. If you are taking pictures, please make sure to be courteous of the workers and do not access restricted parts of the site or interrupt work that is underway.

David Bienick of KCRA and Dale Kasler of The Sacramento Bee are reporting that some of the remaining businesses at the mall may be closing in the near future.

Also, the Kings are encouraging fans to show up at 6th and L Streets Thursday between 1 and 2 p.m.