For those counting at home, the new arena in downtown Sacramento is 755 days away from opening. The team says the project is on schedule and expects the shell of the arena will be visible by next summer.

We're over a month into the arena demolition in downtown Sacramento and the strip of buildings along L Street, including the Macy's building, has been turned into an expansive plot of rubble and half-standing structures.

Next up will be demolition of buildings along J Street, which was being worked on Saturday. 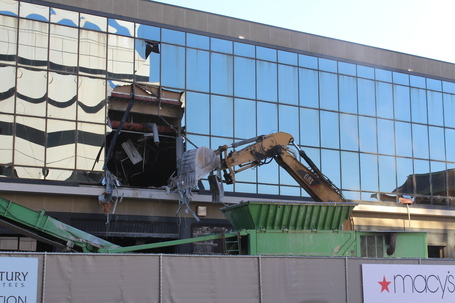 Demolition of the north side of Downtown Plaza (along 7th Street) will become visible in the next few weeks, according to a Kings spokesperson.

Once demolition is complete (sometime between September and October), the foundation for the arena will be laid. This will involve 24" piles being pushed 55 feet deep into the ground. On top of the piles will be large column bases called "pile caps" and then about a two-foot thick mat slab.

"In very basic terms, we dig the hole for the bowl and place the foundation, the structure is erected and the upper stadia is placed, the lower bowl stadia is then placed and then the roof goes on," said Laura Braden, senior director of communications with the Kings.

The construction team has started the installation of test piles already. During the foundation sequence, the construction team will bring in a couple of larger pile rigs and two large cranes to make the structure go vertical. Steel beams will be in place by February or March and the shell of the arena will begin to take shape next summer.

Braden said there have been no hiccups to date and the project is on schedule, and traffic has not been an issue.

"Traffic mitigation has been smooth and we've had no complaints regarding traffic at the arena site," Braden said. "By removing parking along the arena site on J and L Streets, we were able to keep the same number of lanes open. These lanes remain open today."

The restaurants, shops and movie theater on the west side of Downtown Plaza remain open and will continue to be open throughout construction. When the arena is complete, a plaza will connect those existing businesses to the arena.

Here is a couple of photos from Saturday of the main demolition site along L Street. 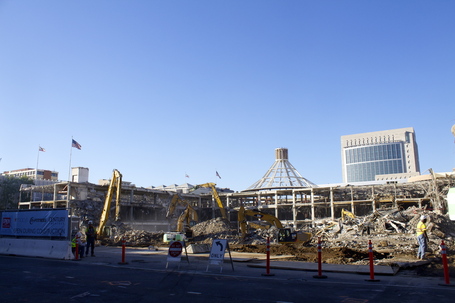 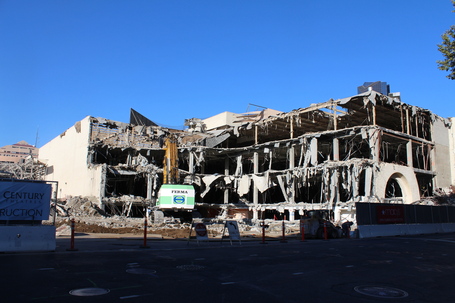 A demolition fact sheet and related maps can be found here.

As always, you can send us pictures to be featured on the site at asksactownroyalty@gmail.com. If you are taking pictures, please make sure to be courteous of the workers and do not access restricted parts of the site or interrupt work that is underway.