Last week the Kings revealed that they would be switching to a new court this year featuring more purple and new sideline logos.  While we saw some of what the court looked like, we have yet to see a full picture of the finished product.

Now, thanks to Grantland, we can.  Zach Lowe did a piece ranking the court designs of each NBA team and the Kings came 16th, but more importantly, a picture of the final design was provided as a reference: 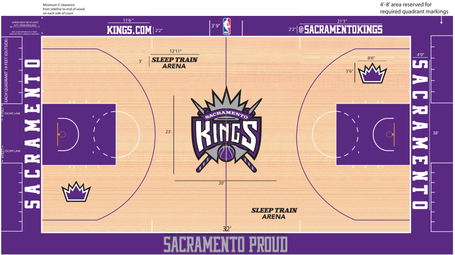 Now that's a lot of purple.  The Kings have had black trim as long as I can remember so this is a big change on this front.  My favorite thing about the new court is probably the "Sacramento Proud" on one of the sidelines.  It's a testament to what we've been through as a franchise and fan community these past few years.

One thing to note is that this could end up being the final court design we ever see at the current arena.  Assuming everything continues to be on schedule with the Downtown Arena site, the Kings will only be playing at Sleep Train Arena for the next two seasons.