Kings desperately need to add shooting to the roster

Share All sharing options for: Kings desperately need to add shooting to the roster

In Tuesday night's loss to the Dallas Mavericks, much was made of Tyson Chandler's egregious flop as well as Tyrone Corbin's inexplicable decision to let 11 seconds run off the clock before fouling Monta Ellis in overtime, but Sacramento's three-point shooting (or lack thereof) deserves a spotlight as well.  The Kings shot just 1-18 from long range for the game, with many of those attempts being wide open.  Darren Collison was 0 for 6, Ben McLemore 0 for 5, Derrick Williams and Ray McCallm both 0 for 2 and Nik Stauskas just 1 for 3.  Dallas wasn't exactly lighting it up from downtown themselves, going just 6 for 24, but in a game that's decided by such a small margin, any little thing counts.

For the season, the Kings are among the worst three point shooting teams in the league.  They're 29th in both makes and attempts and just 23rd in percentage.  As of now the Kings don't have a single player shooting better than 37.6% from three point range.  Ben McLemore had been shooting very well from three early this season, but after struggling for a couple weeks he's back down to 36.5%.  Rudy Gay (37.6%), Darren Collison (37.5%), Ben McLemore (36.5%) and Derrick Williams (31.4%) are the only guys on the roster even shooting above 30% on the team (not counting DeMarcus Cousins, who is 1 for 2). 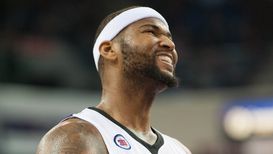 The Kings couldn't buy a three against the Mavericks

The Kings knew they needed to add better shooting this offseason and hoped that the selection of rookie Nik Stauskas would help.  In college, Stauskas was one of the best shooters around, averaging 44.1% from long range on more than 5 attempts a game over two years.  In the NBA however he's only shooting 27.2%, an abysmal number for someone touted as a great shooter.  Sacramento's other offseason moves didn't necessarily upgrade the shooting either, as Ramon Sessions has never been a shooter, and Darren Collison has only been a marginally better long range shooter than Isaiah Thomas over his career.

Since Tyrone Corbin has taken over for Michael Malone, we've seen the Kings try to take advantage of the three point line a little more.  Under Malone, Sacramento shot just 14.6 attempts a game and made 33.1% of them.  Under Corbin they've upped both numbers to 17.4 and 34.2%.  However, those numbers still aren't very good.

The Kings possess arguably one of the best low post players in the NBA right now in DeMarcus Cousins.  He sees double teams on a nightly basis and is a willing passer.  Surrounding him with shooters not only makes it more dangerous for other teams to double, it gets our other guys better looks;  Consider this chart from NBA.com.  In it, we can see that the 3P% of players that Cousins passes to beyond the arc are considerably above their normal averages, aside from Rudy Gay's outlier of 16.7% (on just 0.2 attempts a game from Cousins passes above the arc).  That's because those players are normally left wide open after their man has gone to double Cousins.

The rumored Sacramento deal of Ramon Sessions for Jordan Farmar (which doesn't appear like it's going to happen given that Nate Robinson appears to be going to the Clippers), shows that this front office is trying to add some more shooting to the team.  However, they need to be more aggressive in doing so, both now until the trade deadline and later this summer during Free Agency.

Below is a list of all players in the NBA that are currently shooting above 38% from three point range that aren't stars (aka guys the Kings could actually think of acquiring):

That list is far from complete, as it also leaves guys off who have shown they can be good shooters, guys like Gary Neal, Marco Belinelli, Ryan Anderson etc. who haven't reached the 38% mark this season.

The Kings don't really have the assets to make a big move before the trade deadline, but I'd still like to see a move or two made to bolster our perimeter, and then a real push this summer to add even more shooting when guys like Danny Green and Gerald Green will be Free Agents.  That, combined with improvement from young guys like Ben and Nik, will really help this team's spacing and offensive efficiency.

We don't need the second coming of Peja.  But having someone, anyone, that we can rely on to knock down open shots on a consistent basis will help.