Last night was an encouraging night for me as a Kings fan. Yes, we fell to the hated Clippers. Yes, our first half was rough. Yes, our starting guards were ineffective; however our team also showed some real signs of life and we can already see a difference under the George Karl plan. Let's take a quick look at last night's game and then we will compare it to last season.

DMC's range: This was the second biggest surprise of the night for me. DeMarcus looked comfortable with his perimeter shot and looked confident every time he shot the ball. If Cousins can make one or two per game, this would have a really large effect on the Kings' offense.

Bench mob: Every time our bench came into the game last year, my heart sunk. This year should be completely opposite. There is an excitement to the game when Collison and Marco come into the game. One huge advantage those two players have coming off the bench is that they are potential starters facing off a team's second unit. Butler and Casspi also had solid performances and Casspi contributed to the fourth quarter comeback.

2nd half turnovers: In the second half we only had 5 turnovers, three being committed by Cousins in the fourth quarter.

Starting backcourt: Unless Ben McLemore can step up and become more aggressive and knock down shots, Rondo and McLemore cannot continue to start games together. Right now, our two biggest threats from the perimeter and Cousins and Gay with Koufos and Rondo being non-threats and McLemore hovering somewhere in the middle. Ben also continues to make mistakes on the defensive end of the floor. The best example is the 4 point play at the end of the half from J.J. Redick. Rondo had 4 points, 7 rebounds, and 4 assists. He was 2/8 from the floor and I would assess his game as "fair".

Boogie turnovers: Boogie had half of the team's turnovers with eight. He was the only Kings player with a turnover in the fourth quarter. Magic Cousins needs to be taken out to the barn and shot multiple times. I hope Caron Butler and Rondo are taking Cousins into the film room and showing him how ineffective he is when he brings the ball up the floor. Cousins also needs development from his 3 point shot. Although he hit 4/5, when someone stepped up to challenge his shot he would drive into the lane and into three defenders and throw the ball away. He needs to work on stopping before the defenders collapse or swinging the ball before he is surrounded by opposing players.

Some things I would add:

Rondo/Cousins pick and roll - this is something I would like to see added to the Kings' offense. Cousins can pick and pop with his range or pick and roll and dive to the basket. Rondo is an incredible passer and can also get to the lane. This would add another dimension the offense. Imagine a lineup of Rondo, Collison, Bellinelli, Gay and Cousins with Rondo and Cousins in the pick and roll with three solid shooters on the perimeter waiting for a Rondo or Cousins pass.

Cauley-Stein to the starting lineup - I think this would have a profound effect on both the starters and the bench. Cousins can say he is a PF all day long, but he plays like a Center. Starting two centers clogs the lane and pushes Cousins out of post ups. It also causes problem on the defensive end of the floor against stretch fours like Griffin, Aldridge, Ibaka, and Love. Cauley-Stein is quick and can cover ground more efficiently than Koufos or Cousins. Also, this would bolster our bench even more. Koufos has a decent post-up game, is a solid defender, and is a better passer than initially thought. A bench of Collison, Bellinelli, Casspi, and Koufos is a huge threat to other teams.

Surprise of the night: Marcos Jelly Bellinelli - Marco did not shoot the ball well going 3/12 from the floor and only scoring nine points. However, he led the Kings in assists with seven. He was 3/7 from three point range and 0/5 from two point range. Bellinelli added versatility to the Kings offense that we haven't seen in a long time. He moved the ball and isn't afraid to shoot the ball.

We clearly have picked up the pace from Michael Malone's offense. We increased our field goal attempts, 3 points attempts, 3 point makes, 3 point percentages, and assists. The only statistic that fell dramatically was our free throw attempts. Although we should average more than 18 per game, we will shoot less free throws with Boogie operating on the perimeter.

Last night I felt as if Boogie was not operating in the post as much as I would have liked. However, if we compare last year's third game against the Clippers to this years first game, Cousins had essentially the same shot chart. 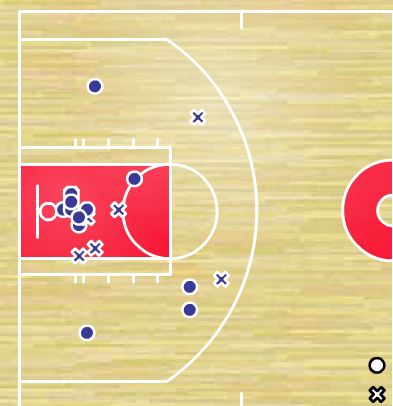 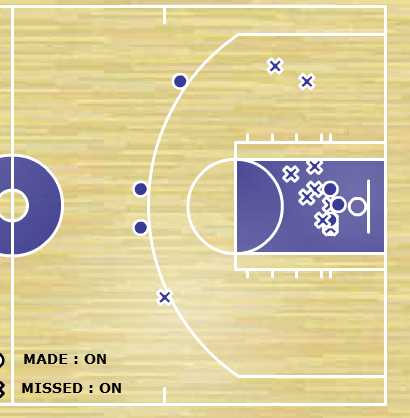 The only real difference is Cousins extended from midrange jump shots to the three point line, which is more valuable shot in today's NBA. in 2015 Cousins had 6 perimeter shots and 17 interior shots (within 7 feet). Last night, Cousins shot 6 times from the perimeter and 15 interior attempts (within 7 feet).

The Kings are going to lose some early games due to chemistry issues and learning a new offense and new teammates. Last night, the players showed the desire to win and almost pulled it out. If our starting back court can step up, and our star player can limit his turnovers, we are going to be battling hard for that eighth seed.