A few months ago Sactown Royalty decided to elicit questions and suggestions through a mailbag article. Many suggestions were made, but one in particular piqued my interest. Camera Marty suggested creating profiles on members of Sactown Royalty so we could all get to know each other better (I'm not certain this is a good thing.) I took that suggestion and ran with it. Over the next few months I'll be working with different members of the site and finding out more about their fandom, their basketball history, and their personal lives. Some profiles may be very similarly done while others will be extremely unique. This is still very much a work in progress, so if you think of questions you would like to ask staff members or suggestions for the profiles - pipe up in the comments!

Who is this guy anyway?

Why are you a Kings fan? They are Sacramento's first true professional sports franchise (front office hijinks notwithstanding). I'm a native Sacramentan, and I cut my teeth on the Milwaukee Brewers version of the Sacramento Solons. The arrival of the Kings was a huge moment for what used to be a small town - we now had big-time, professional sports.

Who is your favorite (non-Kings) NBA player of all time? Kareem Abdul-Jabbar. I've told this story a few times in the threads, but I started rooting for Lew Alcindor when he was at UCLA - it made me a Bruins fan to this day. I was nine years old when Elvin Hayes made me cry (and I never really got over disliking Elvin Hayes), as he and his Houston team knocked off Lew and the Bruins on national TV. I followed Alcindor to Milwaukee and became a fan of the Bucks and Oscar Robertson, Lucius Allen, Bobby Dandridge, Jon McGlocklin, etc. I'll never forget being confused for several weeks when I picked up the paper one fall (the only way to follow the Bucks back then was to read the box scores in the Bee or Union) and discovered that Alcindor had been replaced with some guy named Jabbar, who was really filling it up. I later learned that Lew had changed his name. Michael Jordan is the greatest player that I have ever seen, and I sure liked watching Magic and Bird go at it. But Kareem Abdul-Jabbar is my #1 all time. Met him once on the tram at the Atlanta airport once, too. He was sitting, I was standing, and we were eye-to-eye. Had a nice conversation - nice guy, at least to me.

What was a bigger mistake - trading IT for Teriyaki Sauce, drafting Steak Sauce, or firing Mike Malone? The Thomas debacle, by margin. I mean, here you had a player that was under team control, a restricted free agent, and the Kings determined to not match a contract that in the here and now is highway robbery, one of the best deals in the NBA. Heck, Phoenix got a 1st round pick from Boston for Thomas...which ironically came to Sacramento via the 2016 draft day trade in the form of Skal Labisierre...and the general consensus is that Phoenix got hosed on that deal. So where does that put us in the food chain? Yes, Elfrid Payton would have been a nice pick instead of Stauskas, and I would have been curious to see if Malone would have had the chops to work with DeMarcus Cousins on a long-term basis. But the Thomas deal was a flat flushing of a high value asset.

Which Kings rookie will play the most minutes this season and why?

Oh, you mean for the Kings? I think that it will come down to Richardson or Labisierre, but I don't see any of the rookies really cracking the core rotation this year, unless the Kings blow the roster up at the trade deadline. Richardson will be stuck behind Afflalo, Temple and McLemore (unless McLemore is dealt), and Labisierre is behind a host of guys right now: Cauley-Stein, Tolliver, Gay, Casspi, Barnes. I don't think that you will see Joerger digging out developmental minutes unless they come in garbage time. I'd be surprised if any of those guys cracked 1,000 minutes.

Will you be there on opening night? Not without an invitation from a well-heeled season ticket holder (bats eyelashes).

But really, who is this guy anyway?

Who is your celebrity look-a-like? Ted Leonsis, owner of the Washington Wizards, with honorable mention to bloated Steve Perry and Vinny Del Negro. 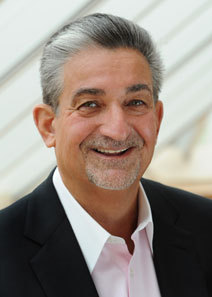 What is/was your job? I'm a Community Association Manager for nine homeowner associations. Yes, I am basically a site moderator for a living (looks at wrists, then at knife on table).

I have a 14 year old son and I manage his baseball team, and my 12 year old daughter is in cheer. My oldest daughter (from my first marriage) is 22, and we keep close. For me, my days are about my kids. I'm lucky that Mrs.section214 feels the same way: kids first. We both have a blast with them. We know that they will only be living with us for another few years, so we are trying to extract as much as we can from it right now.

Do you play/coach basketball or are you simply a fan of the game? Just a fan. Baseball is really my passion - my God, I do love that game and everything that it has done for me in my life.

What is something non-sports related that you are passionate about? Aside from my wife and kids, I would say that I have a passion...or at least a love...for music. I played clarinet, trumpet, percussion and guitar as a kid, but I couldn't read sheet music if you put it in front of me right now. I think that I'm up to around 2,000 songs on my ipod now.

And 1 - My favorite local group right now is Joy and Madness.

What was your last purchase on Amazon or eBay? I forget her name, but the shipping from the Philippines was not cheap. Prior to that, it would have been back copies of GQ: Gif Quarterly.

How much Pokémon Go have you played in the past couple of weeks? What's Twitter?

I'll be visiting Sacramento in October for the first game. I haven't lived there in about 13 years. What's the one restaurant I have to try? Disclaimer: I tried Pizza Guys for fun last time I was there and it was as good as Ben McLemore's ability to enunciate. The missus and I really enjoyed Waterboy the last time we were there. And I wouldn't look past O'Malley's in Old Sac for a brew and either the Irish Tacos or Corned Beef Sliders. Yum!

Is a hotdog a sandwich (Why or why not?) If a burger is a sandwich, so is a hot dog. Make mine with mustard and onions, though I'd prefer a brat if you have one.

Is cake a type of bread (Why or why not?) Alright, what sort of youngin' thinkin' is this? You don't put candles on my sourdough, and you don't put meat slices on my cake. Next question!

Is cereal a soup (Why or why not?) This interview is over. Now leave me, Stephen Colbert and our Lucky Charms & Bailey's alone!

Basketball Position: The point guard that wears a suit and spends a lot of time in Reno. Alley-oop passes and shots from the perimeter are indistinguishable from each other.

Something we wouldn't guess about section214: I don't usually cry when people die in movies, but I do when dogs die. Oh, and Bing Bong, of course.