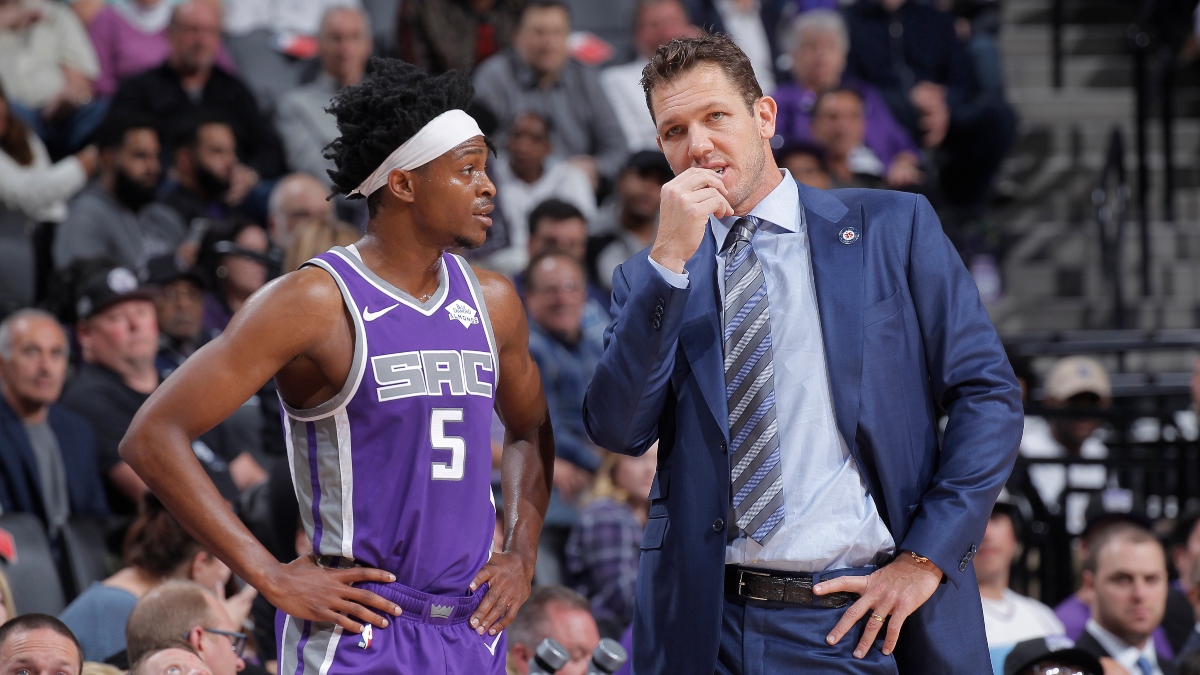 Many here at STR expected an improved record and a playoff appearance. After beating the Wizards last night the Kings are currently in 9th place, trailing the Grizzlies (30 - 31) by 3 games, edging out the Pelicans (26 - 35), Spurs (26 - 34) and the Suns (24 - 38). Per 538 yesterday the Kings were given a 10% chance of making the playoffs--the same as the Grizzlies while the Spurs had a 2% chance and the Suns less than 1%. Cross referencing ESPN before the results yesterday, the odds are worse for the Kings, giving Memphis a 22.7% chance, Portland a 22.2% chance, San Antonio a 13.4%, and Sacramento a 9.7% chance of making the playoffs. When you look at the last ten games, the Kings have won 7 of 10, while over that same stretch the Grizzlies and Suns have only won 4 and the Trailblazers and Spurs have only won 3. So despite the recent trend that suggests the Kings might be the most likely to make the playoffs, why does it appear they have the worse odds to beat out other teams for the coveted 8th seed? I looked at the Kings over this last season I came up with 5 reasons why it looks problematic for the Kings to break their playoff drought this year.

De'Aaron Fox's Health - De'Aaron is likely the most important player on the Kings roster and his injuries, including an ankle that held him out 18 games and the more recent shoulder and abdominal issues have not helped. This possibly accounts for some of his regression this season. Fox is shooting just 67.8%, from the free throw line and an abysmal 31.4% from behind the arc. Fox is slightly down on steals, blocks, while committing more fouls and turnovers. His assist numbers rank currently between Lorenzo Ball and Spencer Dinwiddie for 15th in the League. Simply put, the team needs Fox to be the best version of himself this year to sneak into the playoffs and likely average around 20/8/5 with at least 2 steals per game while being dependable behind the arc and at the charity stripe.

The Schedule - Looking at the Kings' remaining games it does not look easy to move up in the standings. The positives point to the Kings 13 remaining games at home versus only 9 on the road and only 2 back to back games. One will be a quick hop from Orlando to New Orleans. The negatives are many. So far they are only 13 - 15 at the Golden 1 Center while 13 - 19 on the road. While I would love to presume that the Kings will stay hot, I just cannot see how when looking at the schedule. I think even if you trade a couple losses for wins I think the team will need to win both games against the Pelicans, take one from the Lakers, Clippers, and Nuggets. Not impossible but its just as likely that the team trades a few wins for losses with the Trail Blazers, Magic, and Spurs. Splitting the difference I have the Kings ending up with a 39 - 43 record as you will see in my schedule results table below.

The Teams Above Them - Certainly the Suns and Spurs could jump ahead of the Kings, I focused on the more likely scenario that one of Memphis, Portland and New Orleans would have to sputter in order for the Kings to make the playoffs. Memphis has the greatest chance of sliding down. They have a really tough schedule the last month of the season including 11 road games and 14 games against playoff teams and the rest against the cluster still vying for the last spot. I predict they fade and finish 36 - 46. Portland I expect to be right there until the end; I have them finishing 37 - 45 but could end up nabbing the last spot if they can handle a brutal 6 game road trip that includes the Pistons, 76ers, Celtics, and Nets. My biggest fear is the New Orleans Pelicans with the now 300 pound super rookie Zion Williamson. He is an absolute beast and should feast on the 7 cellar dweller games they will face. I expect they will beat the Kings in the standings and finish 40 - 42. I took a shot at showing how I deduced these records in a table below.

Luke Walton - While I was a fan of the Walton hire (not the process nor the off-court issues), I am befuddled by some of his coaching decisions. Why was Buddy initiating the offense so much and why were so few plays calling for him to run around off ball where his ability to create space off screens put him in good spots to score. Where were the Curry double screens? I did not understand why Dedmond was't better utilized in a transition offense. I was patient given the injuries that it would take longer to assess what this team had going for itself but the team's pace is 26th, its DRtg is 21st, and ORtg is 18th. Despite having elite shooting from distance the Kings are only 10th in 3PAs per game. Despite the value of drawing fouls the Kings are 28th in the league in FTAs and passing a staple of the Divac era doesn't seem to be their strength as they are currently 28th in the league in APG. While I would like to see a season with the core team intact to better evaluate things, it is quite troubling how the team is operating under this coaching staff and without better values in several of these categories, I don't see how the Kings surpass Memphis, Portland, and New Orleans with better coached teams in their fight for the final playoff spot.

X-Factors - The final issue in the way of the Kings getting into the playoffs is how they play in close games. As a team they have been in 34 clutch games and have a record of 17 - 17. If they want to make the playoffs they will need to win more of those winnable games. As a team they are shooting 76.4% of their free throws good for 19th in the league while attempting only 20.2 free throws which ranks 28th. They need to do a better job of attacking the basket, drawing fouls and converting. Conversely they need to do a better job of not committing fouls as they are currently ranked 25th at 21.8 per game. Finally I have witnessed too many big leads given up and to many times where they trailed by double digits this season. Overall the team's lack of consistency makes it a hard to team to bet on making the post season. While I will be rooting for every win down the stretch, the team will have to play its best ball of the year for the next month, something we haven't seen over that long of a stretch in years.

Which Team gets the 8th Seed in the West